The cellar door barely opens for 6 months out of 12 months in the year. Each year the new wine is released on the 1st of August after being aged for 2 years in the cellar and then once it’s sold, the cellar door closes back down for the year.

Let me introduce you to Mann Winery located at the upper end of the Swan Valley in Baskerville, right in between Upper Reach and Harris Organic. Two grapes are produced on the Mann property, Cabernet Sauvignon and Cygne Blanc.

When my parents were over recently, I was lucky enough to be sauntering through the Valley on a weekday and saw the open sign for Mann and I couldn’t resist! I tried their 2012 Brut as part of my 25 Swan Valley Wines of Christmas last year so I knew we were in for a treat.

Passing a beautiful blossom-like tree and the rows of vines as we pulled up the driveway was simply beautiful. As we walked over to the cellar door, Dorham Mann greeted us. The Mann family has a long history in the Swan Valley and have been major influencers in the local wine industry. Dorham explained how his father (Jack Mann) headed up the winemaking team at Houghton’s for many years, after taking over from his Dad. Jack was an absolute pioneer in the WA wine industry and is to thank for creating the elusive Houghton’s White Burgundy back in the day which some may say put Western Australian wine on the map.

The family’s involvement in the wine industry doesn’t stop there either, with Dorham’s sister and brother-in law, Corin & Neil Lamont founding Lamont’s Winery in the Swan Valley. Jack’s Grandson, Robert Mann heads up the winemaking team at Cape Mentelle in Margaret River. And from all the cricket pictures in the cellar door you can tell the sport was big in the family which I later found out that Jack played as well as Dorham’s brother who actually represented Australia a number of times in test cricket. 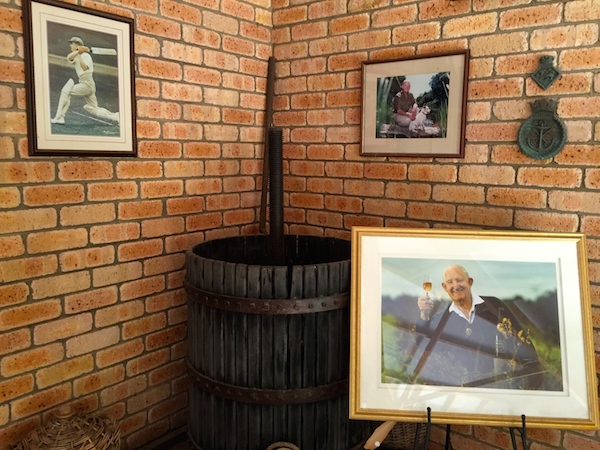 Dorham was the head honcho at Sandalford for a number of years and now runs the lovely Mann Winery. The Winery was purely a way to satisfy the thirst of his wine-loving family up until the recent years when they decided to sell their sparkling wines to the public (and most recently a still rose). That’s right, Mann specialise in sparkling wines (made by the same method as Champagne) and are darn good at it!

Dorham with the help of his daughter do most of the vineyard and winery work including hand disgorging all the bottles. It’s still done purely out of passion which is why they have the philosophy ‘once it’s sold, it’s sold’. No plans to up production which I guess is what leads to its cult like following. I’ve now joined the cult!

The cellar door/shed is a loft-like-apartment with the upper level looking down over all the winery equipment. Dorham will happily take you through a tasting of his 2-3 elixirs free of charge. Tasting samples are served up in the cutest mini flute glasses I’ve ever seen! What puts the cherry on top for uniqueness at Mann is their label with a white swan on it. This sparkling wine is made from Cygne Blanc or in other words White Cabernet (not to be confused with Cabernet Blanc). 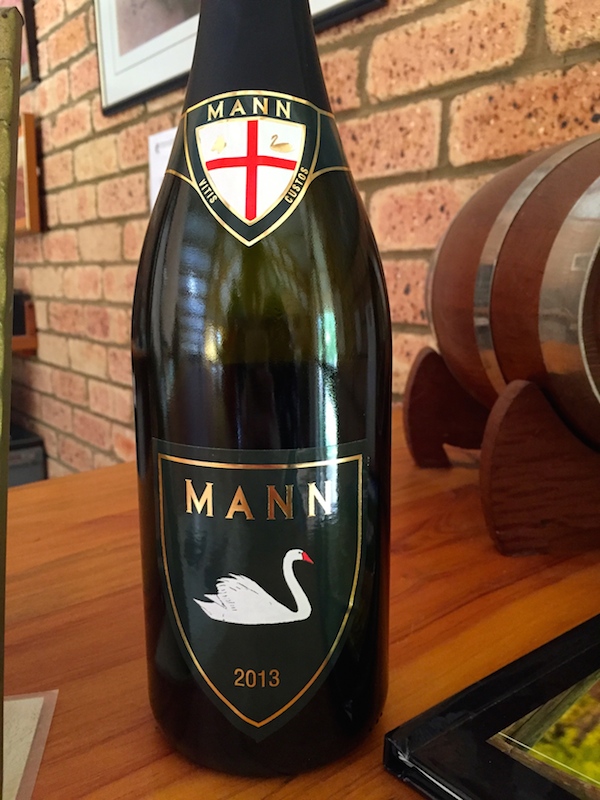 A seedling was planted by Mrs. Mann (Dorham’s wife Sally) in 1989 as a very surprising experiment. This little seedling that came off the Cabernet produced a new varietal which is now patented by the Mann family and produces one amazing nectar! We got to see pictures of the white vs red Cabernet bunches and everything down to the leaves look nearly identical except for the fruit colour. 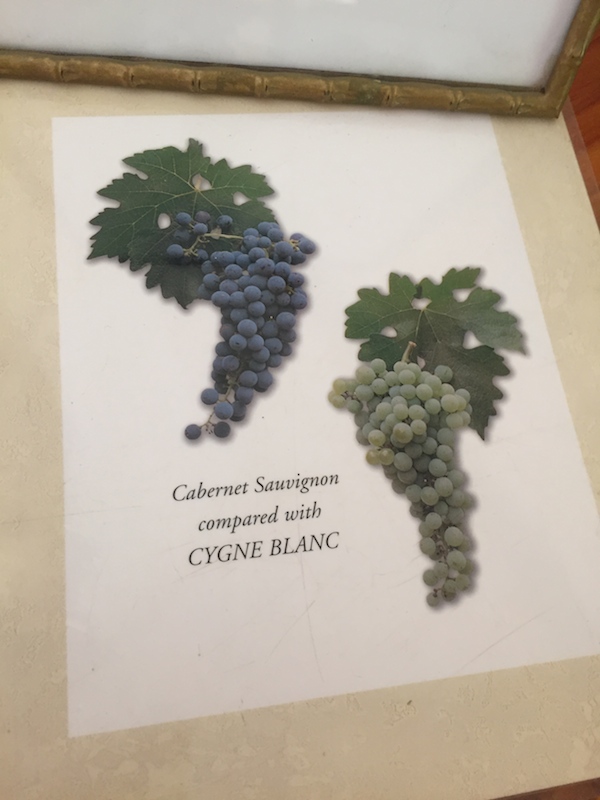 As the Mann’s patented the varietal they got to name it and called it Cygne Blanc which translates to ‘white swan’. The grape is only grown in Australia and it’s said to be the first true Australian grown grape variety. Wow!

If you haven’t already tired it then I suggest you visit Mann asap! I have no doubt you’ll enjoy Dorham’s passion and sipping on his amazing bubbles. But make sure to leave some for me!

This 2013 Rose Brut was aged for 2 years as all the Mann sparkling wines are. It’s made from 100% Cabernet which you’d never guess from a blind tasting, well I wouldn’t! It’s a crystal pink apricot colour on the eye with very small bubbles. On the nose cranberry and strawberry notes rise from the glass with an underlying biscuity, savoury nature. The palate is super smooth and creamy with flavours of raspberries, white peach and citrus yet it is bone dry – just how I like it! 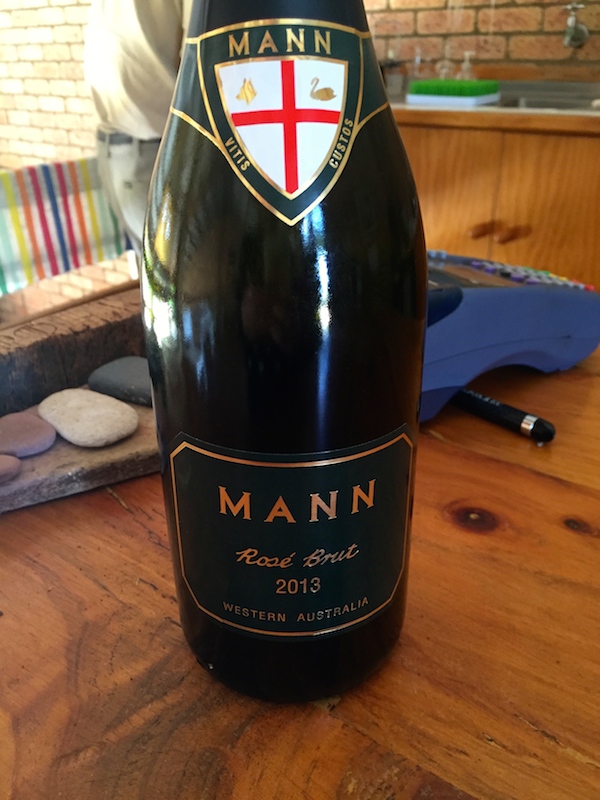 My first ever experience with Cygne Blanc aka White Cabernet and I loved it! It’s a 22-carat gold colour on the eye with tantalizingly aromas of vanilla pods, toasted orchard fruits, baking spice and rich apricot whiffs. On the palate it has a me-oh-my smooth and silky texture, with lovely fruit characters and a brilliantly clean finish. A wonderfully balanced bubbles that left us all fighting over the last drops in the bottle which we definitely squeezed dry!

And one last geeky note – the Mann bubbles all have zero dosage which means they’re nice and dry.

Find out more about Mann Winery: If you live in Perth the Mediterranean is literally a 25-minute drive from the CBD. I am not joking, you can experience the food, wine and ambiance of the Med in a matter of minutes. The difference is that you don’t have to board an airplane for a long, uncomfortable flight that will probably cost… It’s lovely to welcome Naomi back on the blog who is sharing with us the luxury birthday weekend she went on with her partner Bryce in Perth’s Swan Valley… Happy Birthday Bryce!

With a Celtic logo and a very Irish sounding name, I was sure Carilley Estate was going to be owned by an Irish family. The Estate is located at the upper end of the Swan Valley on the banks of the Susannah Brook. Wine barrels are set amongst the lush gardens and immediately I can… The Swan Valley is proving to be a hub for innovative thinking when it comes to wine, craft beer and distilleries and there is now a new kid on the block, working right out of Pandemonium Wine Estate; Swan Valley Gin Co. I was lucky enough to be invited along to the launch of their gins…

One of the most unique dining experiences I have come across in Perth… When I saw an ad on Facebook for a free drink with any pizza ordered on Thursday nights at Chapel Farm in the Swan Valley I simply couldn’t say no. Located in the Middle Swan, not far from Midland central I was truly…