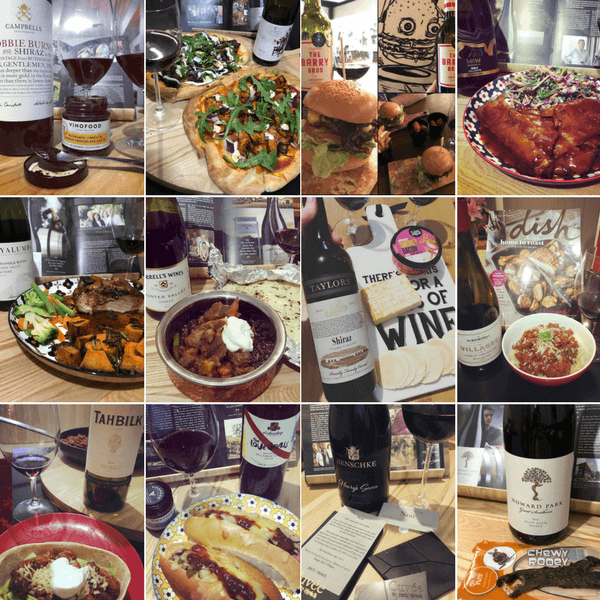 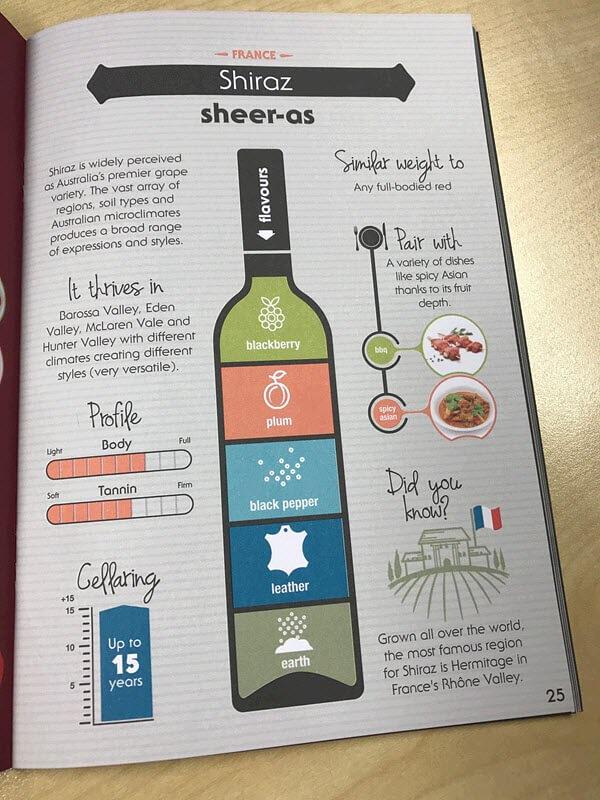 Initially, when I went to the supermarket to find the first match, I was looking for hard smoked cheese as I heard smokey cheese was a good match. What I found was some slightly smoked soft cheese and also some of the Zoosh ‘Bomb Diggity’ Bacon Dip. It was the latter that had my palate in a frenzy with the wine. The smokiness and the bacon/onion flavours in the dip really complimented the wine. Who was I kidding, bacon goes with everything right?

It’s a brilliant deep garnet shade on the eye. The nose is full of leather, spice, black olives and plums. While on the palate that plumminess is joined by cherry infused acidity with a sprinkling of nutmeg and a silky mouthfeel. Give me a bottle of this, a tub of Bacon dip and that’s my Friday night sorted. To be honest, the Dish Mag’s recipe below is a fancy version of spaghetti Bolognese. We decided to use chorizo sausage meatballs for a bit of a kick and it was delicious.

This red blend is a plummy red on the eye. Notes of black olives, cherries, raspberries and violets come through on the nose. In the mouth, it’s juicy with a good oomph of flavour and decent length finish. Wine & food matching bliss! Pork is a great meat to match with Shiraz. These tacos were infused with smoked paprika, cumin and BBQ sauce. The BBQ sauce and Shiraz have a real affinity for one another.

It’s a deep ruby-red colour in the glass with notes of cassis, violets and black pepper on the nose. That cracked black pepper flows through to the palate with plentiful notes of berries, plums and cherries. The finish is long and tannin infused. Very enjoyable. Mr Spittoon has a real knack for cooking awesome pork shoulders. He picked up one and put it in the slow cooker with some fennel and other ingredients. We also added some veggies and rosemary roasted pumpkin to the plate. I found the fennel and rosemary really worked well with the Shiraz, alongside the pork of course.

It’s a blackish ruby-red colour in the glass with quite a savoury nose to it. Think leather, spice, bark and stewed plums. It’s full of juicy cherry flavour in the mouth, with plenty of fresh acidity and silky tannins. The finish on this Shiraz seems to go on forever! Naturally, Shiraz goes well with burger night whether it’s beef, lamb, pork or even a mushroom or capsicum patty. We headed out to a local BYO burger spot and my beef, cheese, pickles, lettuce, tomato, caramelised red onion and ketchup burger went superbly with this bottle of Shiraz. As this Shiraz is blended with a bit of Cabernet (notorious for matching well with beef) – we really thought we couldn’t go wrong. We were right.

On the eye, the wine is a deep ruby-red with a tinge of purple. It has a warmth on the nose with a distinct savoury/earthy character to it alongside dark fruits. In the mouth, it has super smooth flavours with a lovely juicy finish. The burgers were truly complimented by this vino! Of course, we had to do the ribs & Shiraz match! We had some pork ribs smothered with a BBQ sauce which, despite the mess, went down superbly with the Shiraz. Our Riedel glasses were a bit messy with finger prints on by the end, but it was all worth it!

In the glass, it’s virtually opaque in colour with a black-garnet tinge. The nose is enticingly jammy and oaky with a certain warmth to it and a hint of marmite. And on the palate, these 4 words were the first to come to mind: juicy, plump, long finish. It’s a heavier style Shiraz that deserves to be teamed up with meaty, BBQ flavours. You may have seen a few posts back I took Cuvee Chocolate by Deniz Karaca (chocolate made specifically to match wine) for a test run and I was amazed! Therefore, I couldn’t do a wine & food matching post without including this. We teamed the ‘Noir’ 85% Dark Chocolate up with the below wine and I kid you not, it was like a black forest dessert when combined. Oh my god. Heaven!

It’s a Shiraz, Grenache, Mataro & Viognier blend. On the eye the wine is a lovely deep yet bright red with notes of cherry cigars, hints of mocha and some leafy/earthiness to it on the nose. In the mouth it’s juicy…. decadent… and covers every taste bud in your mouth with flavour. The fruit forward cherry flavour is absolutely perfect with the dark chocolate making it like a Black Forest dessert in your mouth, but better! Oh my god, I definitely wasn’t a believer until I tried this utterly delectable match. I really felt like curry, but typically my go-to vino to match is an off-dry white or if going red, a Pinot Noir. However, I decided to buy one of The Spice Tailor’s meal kits for a Southern Pepper Curry (thinking the pepper will compliment the wine) made with lamb and my oh my, it was divine! I will definitely be enjoying this match again soon. Quick tip: If matching curry with Shiraz, try to find a lightly oaked Shiraz.

It’s matured in large old oak barrels so the fruit is highlighted and I think it’s this not overly oaked style of Shiraz that worked so well with the curry. It’s a pretty ruby-red shade on the eye. Notes of black pepper, raspberry liquorice, blueberries and a hint of vegetal (Brussel sprouts according to Mr Spittoon) came through on the nose. In the mouth, it’s super smooth and easy drinking with wonderful fruit acidity and light tannins. I do love hotdog night! In our house it’s ‘make your own’ night, however, the typical ingredients include; sauces, cheese, beetroot, pineapple, onion, jalapeno, pickles and more! We opted for pork sausages, knowing how well pork goes with Shiraz, but I think the real highlight was how well the Shiraz went with the BBQ sauce – yumo!

Deep shiny garnet colour on the eye. On the nose, I picked up notes of spice, smoked meat, berries, red liquorice and some oak. In the mouth, it’s full of dark black fruits and lingering tannins. 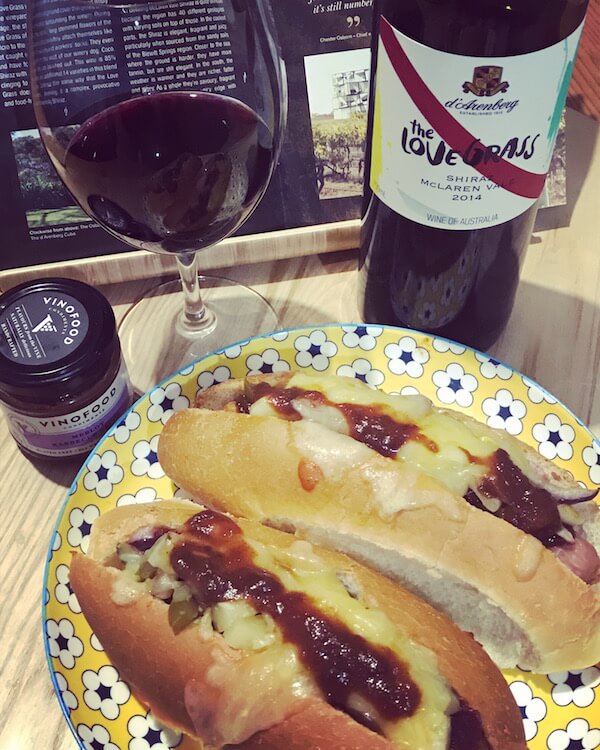 Does a dinner get any better than one made up of Shiraz and jerky? I think not! I had heard kangaroo meat goes well with Shiraz, and I hadn’t tried kangaroo jerky, so I thought this WA made Chewy Mooey jerky would go perfectly with this WA-made Shiraz. I was right.

This particular Shiraz is a deep, dark garnet-plum colour in the glass. On the nose, it’s elegant with a fresh coolness to it and juicy fresh cherries laced with vanilla. Those cherries come through on the palate backed by a lovely clean structure, silky tannins, hints of blackcurrants and a peppered finish. 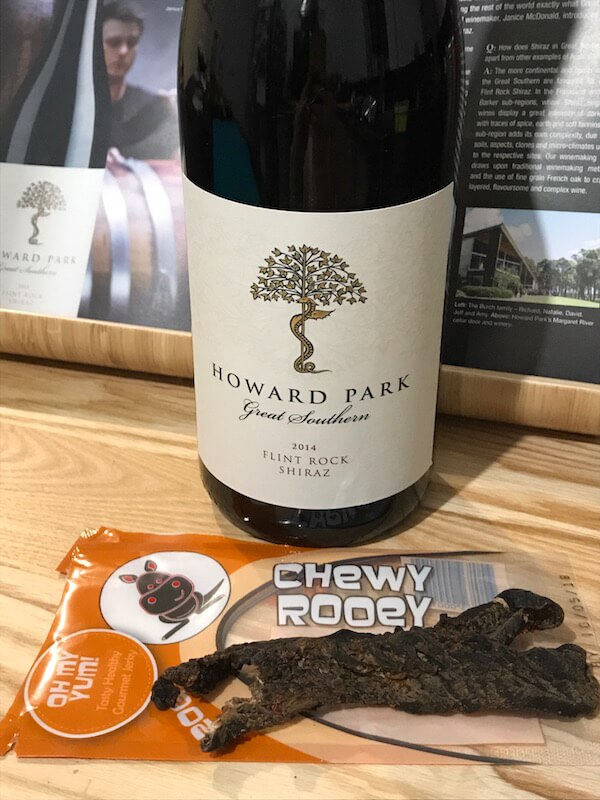 Pizza is one of my favourite meals. I decided to make some homemade pizza one night –  a lamb, red onion, olive, feta, rocket and Greek yoghurt one and a roast pumpkin, rosemary, feta and rocket one – diiivine! Both matched the vino superbly.

A medium red colour on the eye with bramble fruits and savoury spice on the nose. It really evoked thoughts of venison with a berry type sauce for me. In the mouth its full of raspberry and blackberries with a hint of smokiness and oak. A full-bodied Shiraz with a very tenacious finish. 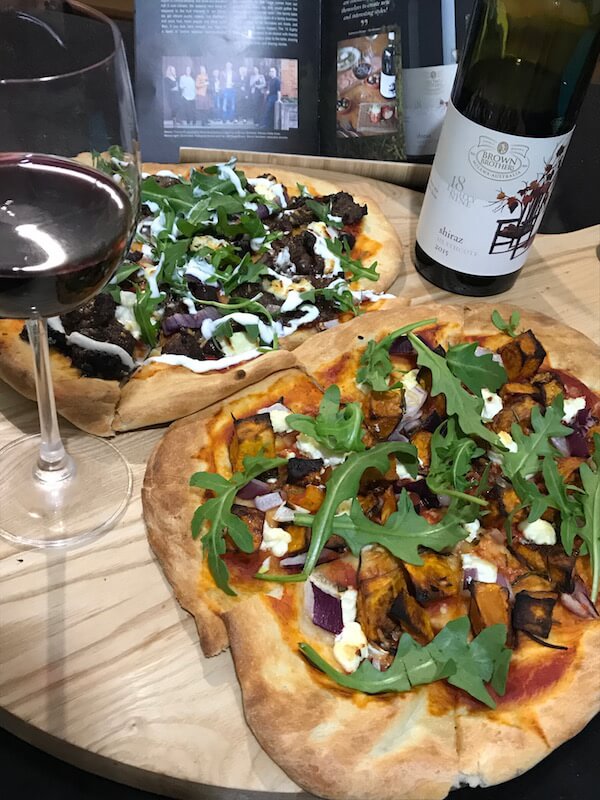 I picked up a jar of jar VinoFood’s Mandarin, Chilli & Shiraz Chocolate Sauce from Just In Time Gourmet as I’d heard so many good things about it. Knowing already how great chocolate is with Shiraz, I figured this sauce would be a match made in heaven since it was already infused with Shiraz. The sauce made me think of chocolate orange – it was divine and between you and me, a jar of this, a spoon and a glass of Shiraz made me one happy lady!

This Aussie Shiraz is a deep ruby-red with scents of black fruits, liquorice and a lick of oak on the nose. The palate is full of elegance, wonderfully juicy blackberry fruit and earthy/savoury tannins on the finish. A superb match to the chocolate-orange inspired sauce! Disclosure: I was gifted a Bistro Lunch for 2 by the team at Must (thank-you!). I find that all the best lunch deals are on during the week when I’m at work and don’t have the time. That’s what I like about the new lunch deal at Must Winebar on Perth’s Beaufort Street – the…

Hey Perth! I hope you are all planning on visiting the Good Food & Wine show this weekend at the Convention & Exhibition Centre, as it is $36 well spent! I decided to go yesterday on the Friday so i could get a head start and find out, or should I say ‘taste out’ the… 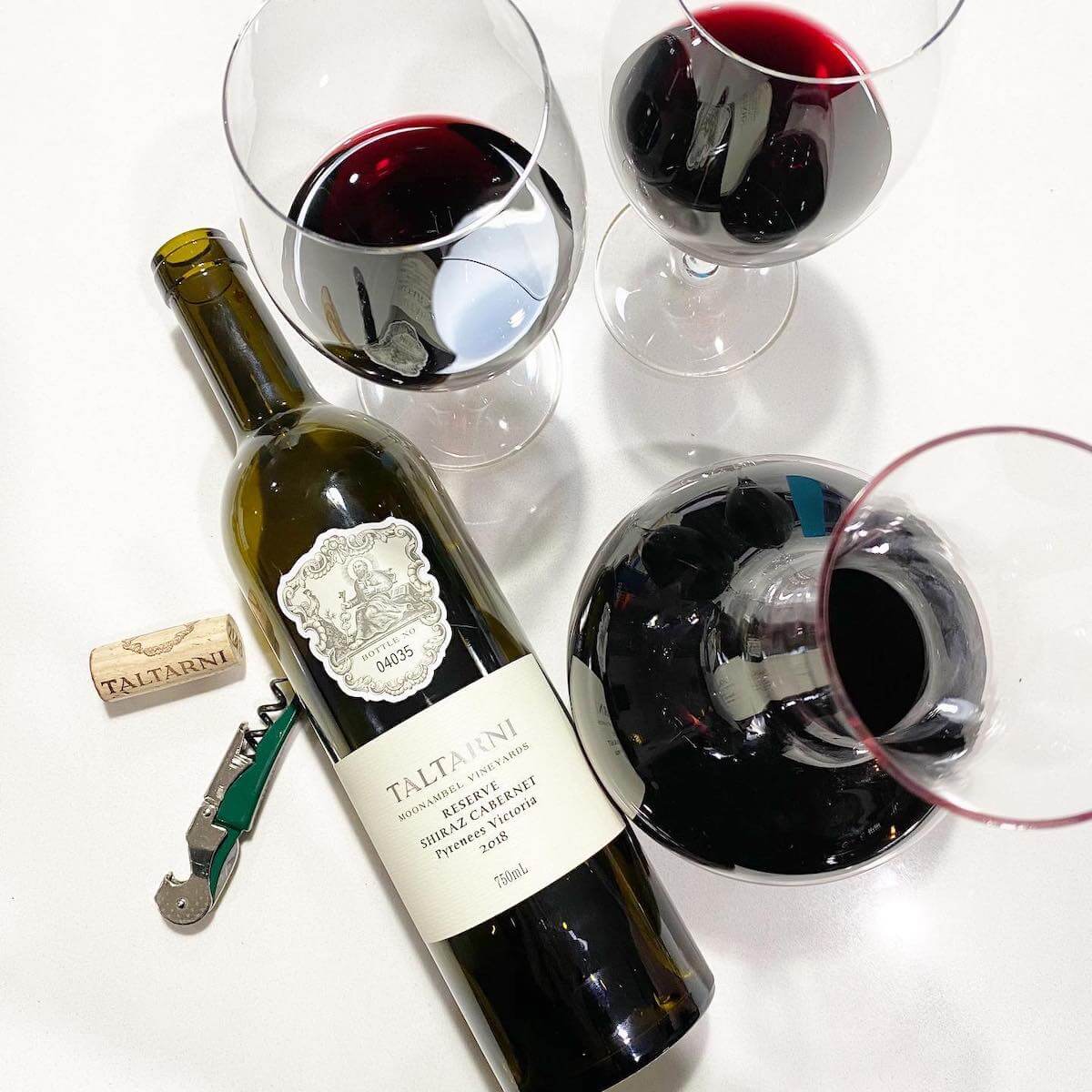 This is one of those wines that is impossible to stop at just one glass. Trust me! Taltarni Vineyards kindly sent me this sample bottle to taste recently and it’s safe to say we enjoyed every last drop.

“Distinct wines, that’s what we’re all about” – Evans & Tate Winemaker, Matt Byrne Disclosure: I was invited by the Evans & Tate team to attend this event. The lovely team at Evans & Tate invited Mr. Spittoon and myself down to their Margaret River cellar door to attend a special Winemaker Lunch to launch… I have to admit my interest level for the Good Food & Wine Show (GFWS) jumped through the roof when I found out one of the main sponsors for the event is Riedel. I have long been a fan of the Austrian glassware company. When I was merely 18 I was lucky enough to have…