The five-hour drive from Perth to Albany was worth it for this 5 hour amazing long lunch last weekend. The wine was the hook (3 Drops Wine & Olive Oil – you can never go wrong with these tipples!), followed by food by My Kitchen Rules judge and chef Colin Fassnidge and then the absolutely gorgeous view and scenery was the cherry on top at Garrison Restaurant atop Mount Clarence in Albany. There’s no doubt this will be one of my 2017 wine and food highlights (alongside last month’s degustation dinner in Guildford!).

As part of Taste Great Southern, Mr. Spittoon and I were invited down to the region to attend this lunch. A huge thank you to everyone involved as not only was this lunch a fantastic mouth-wateringly great experience but we had the most wonderful long weekend. The whole time we were literally talking about our house in Albany we are going to buy WHEN we win lotto!

Plus I thought this lunch was the perfect occasion to debut my VINO heels by Taylor Says which I purchased online through heels.com

Wow Garrison must have one of the best locations for a restaurant in WA – if not Australia. To be honest, we hardly knew much about the history of the area so to hear about all the WW1 and ANZAC ties was pretty incredible on our taxi drive up to Garrison.

Naturally being alongside the National ANZAC Centre and the Military Museum on top of Mount Clarence it makes sense the restaurant runs with this military theme. The restaurant has simply breathtaking views of King George Sound and Princess Royal Harbour.

And what a spot it is to enjoy some local vino and produce! The team behind Garrison know what they’re doing with father and son John Saville-Wright and Leo Wright heading up the team. All the staff were amazing at the lunch, it really came across that they are a solid team and we’ll look forward to visiting Garrison again next time we’re in Albany!

If you’re a regular reader then you’ll know I have a lot of vino-love for 3 Drops Wines and Olive Oil. Joanne and John are the married duo behind the label and it’s safe to say that not only do they produce some amazing wines and oils but they do such a fabulous job of representing the Great Southern region.

3 Drops work with the talented Rob Deletti of Castle Rock Estate to make their wine and it’s safe to say they have some pretty exciting projects coming up which we managed to get wind of recently:

I can’t wait! All the wines were paired with the dishes wonderfully. The Riesling was a sure hit with the Albany rock oysters and the Chardy with the tuna was heaven! 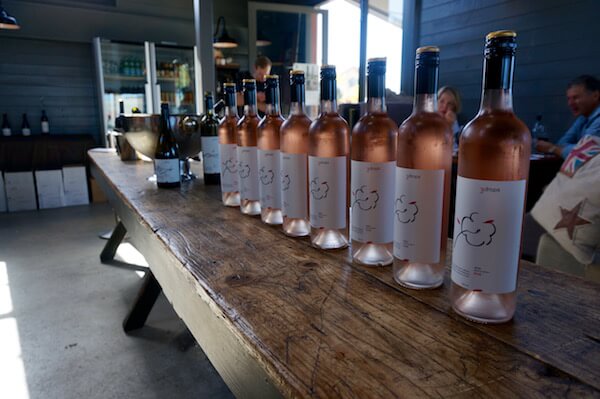 So what did we eat? As mentioned the star of the show was Irish-born Chef Colin Fassnidge who is definitely a well-known foodie name across Australia and New Zealand being one of the judges on My Kitchen Rules (aka MKR). I was lucky enough to meet him at the Albany Wine and Food Show the day before, however that didn’t stop me grabbing another photo with him at the lunch (though he does look like I plied him with wine before getting the photo.. lol)! And pretty much stalking him with my camera… Colin and the Garrison team did a splendid job with all the dishes they served up. All the recipes for the dishes can be found in Colin’s book ‘Four Kitchens’ – which as you can see from the photo below, someone got a little creative with if you look closely. At the end of the lunch this book was auctioned off with proceeds going to charity – it went for $1,500! (And yes that is Colin’s signature on the bottom!)

To start with, the table looked absolutely gorgeous from when we first sat down. Naturally having 3 wine glasses in front of you is a good way to start a long lunch. The sourdough bread and butter teamed with the olive oil went down so well, it was hard to restrain myself from eating too much of it so I didn’t fill up too quickly.

The pickled veggies and tarragon emulsion were a huge hit around the table however my love was the Albany rock oysters with pickled nori and salt bush whilst Mr. Spittoon basically devoured a whole bowl of the chorizo popcorn with rosemary, paprika and cayenne to himself. Lucky for him a lot of people found it too spicy – apparently it was the spicy chorizo that made the dish for him!

The first dish up was the tuna with lemon, cucumber, nori and samphire – it was absolutely delightful and probably one of my favourite dishes of the day. As we were sitting by the lovely lady from AVeg we found out that samphire is a succulent also referred to as sea asparagus – something new for me and rather tasty with a fresh salty taste and crunch like asparagus. This was followed by the lamb belly with baba ghanoush, aubergine and pepper jam – which was a really interesting one. The shredded lamb belly was slightly deep-fried to give it a crunch – another favourite for Mr. Spittoon and cooked to perfection. It wasn’t dry at all which would be a risk cooking it this way. Following this was my other favourite for the day – the Denmark Marron with bisque, fennel and spring onion. Mr. Spittoon doesn’t eat marron so I hit gold here. He did however slurp up all the bisque and wonderfully cooked potatoes up very quickly before handing the plate over to me. The leftover bread from the entree came in handy to soak up all that bisque! Next up was the Spanish Mackerel with artichoke, prune and PX. It was the sauces on the plate that I enjoyed and it looked pretty spectacular. By this point I was full to the brim YET I couldn’t leave even a morsel on my plate with the next dish. The 3 Drops Shiraz was wine and food heaven with the perfectly cooked lamb with cauliflower, chocolate and jus. An interesting combo but it worked, very well in fact! The dessert ‘Bounty… like the chocolate bar but not’ was a stand out! Think chocolate, coconut and varying textures – sweet, decadent and yes I may have used my finger to make sure I licked up every last taste of this one. The afternoon, well just about evening by this stage, ended with petit four (homemade marshmallows) as we finished off our glass of the Cabernets. Wow what a wine and food journey we had! It was a great Taste Great Southern experience – one that I’d love to do all over again and no doubt will re-live through this post for months to come.

Mr. Spittoon and I were lucky enough to sit with some fabulous people including the wonderful Mandy & Jim who we actually shared a taxi with on our way back down to Middleton Beach – so thank you to everyone at our table for being such great company!

If you get the opportunity to try 3 Drops Wines (and the olive oil) or to dine at Garrison then I’d highly recommend you do! Last night I was lucky enough to be invited to a Great Southern Pinot Noir Masterclass at the Petition wine bar. The tasting consisted of 10 Pinot’s from WA’s Great Southern wine region, plus a couple of extra surprises from the cellar. I definitely learned a thing or two and I feel I have some… I would dear say nearly everyone wino in Australia and probably New Zealand too has heard of the wine brand – Brown Brothers. If you haven’t, then you’ve been living under a rock. However, you may not have come across the uber luxe and special range of Brown Brothers wines called, ‘Patricia’.

After Michelle Payne was the first female jockey to win the Melbourne Cup the other day I thought it would be a good time to give a bit of a holla to an upcoming event in Perth to celebrate women in the Australian wine industry. The first ever Australian Women in Wine Awards is taking…

Spring is in the air and I’m in the mood for wine! I have to admit I feel like wine 365 days a year but there is just something about those longer & warmer days that set my taste buds on hyper-wine-drive. So here are some of favourite wines to be drinking this Spring: New… The Travelling Corkscrew has been heading along to Scarboroughs Sunset Wines since it started, back in 2014 and the event continues to evolve to suit the changing landscape of what alcoholic beverages Western Australians are enjoying. Last years Sunset Wines was bittersweet, as I knew that the event was going to be the last wine…

I had my tickets for the Good Food & Wine Show all ready to go. But then the super exciting news that our keys for our new house were ready to be picked up and after about 16 months of waiting for this moment, there was no way I was going to delay it! Thank-fully…