My winemaking is based on mouthfeel”

– said winemaker Jonathan (Jono) Mettam at last nights Grace Farm Wines dinner. Between Jono and seasoned viticulturist Tim Quinlan of Grace Farm from the Margaret River, and of course the lovely Anja Lewis their sales rep – it was a fantastic night to get to know Grace Farm that little bit better! A big thanks to the team for letting me join them on the night and for answering all my questions!

I mean seriously, how often do you get to dine with both the winemaker and the viticulturist of a vineyard? What I love about this scenario is the passion, as we all know, when you get someone talking about what they love – it truly is captivating. I nearly feel like I have been to see the sustainably grown vines ( only organic-based fertilisers are used) on Cowaramup Bay Road in Gracetown.

The unique thing about Grace Farm and putting together a wine dinner is they have 3 styles of wines and then obviously the back vintages for these. On the property in Margaret River they grow chardonnay, sauvignon blanc, semillon, cabernet sauvignon and then very small amounts of malbec (500 vines), petit verdot and cabernet franc for blending. The Cab Sauv which then utilises some of those blending grapes is always co-fermented right from the start to bottling, Jono was telling us on the night. To do this, Tim curates the vineyard so the grapes are all ready to be picked at once, sometimes it may have to be in a couple of batches but typically it’s all at once which of course saves money for the vineyard and allows  this co-fermentation.

And lastly, before I delve into the mouth-watering pictures from last night, Jono also talked a bit about the 2017 in Margaret River. As we know up here in the Swan Valley it was a bit of a turbulent vintage, especially for those near the Swan River who lost fruit to the flooding. From what he said, I am very much looking forward to trying the wines that come out of this year. He believes it’s been one of the most challenging vintages in Margaret River since he began as a winemaker in 1994. He did mention 2006 was also challenging however he urged us to ‘take notice of the 2017’ when the wines start to emerge from this vintage in a few years time. What made the vintage so different you ask? It was a very slow-growing season, and by this we mean that the grapes were picked nearly 3 weeks later than normal. I can’t wait to see what comes out of it!

So now, let’s get back to the dinner. The dinner was held at French restaurant, Petite Mort in Shenton Park. A new restaurant and new area for me! The dinner consisted of 5 savoury courses and matching wine plus bread to start and gorgeous petit fours to finish. Before I delve into the details I want to mention the fantastic service, everyone from Petite Mort who was looking after us on the night were a complete pleasure! 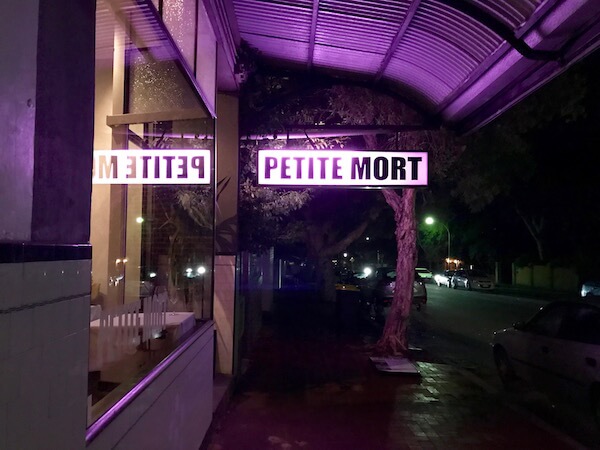 What a line-up! The cool thing about the matching wines for the night was that we had 2 vintages side by side for the whites and 3 vintages of the Cabernet Sauvignon. I can feel your jealously right now through the computer screen – but don’t worry I made sure I savoured every drop!

As you know, when I go to events like this, I don’t sit there and write tasting notes – I prefer to do that in my home where I can have a one-on-one intimate conversation with the bottle at hand. However I can tell you that I enjoyed every single one of the wines – as always a girl has her favourites and on the night I would have to say both the Chardonnay’s had me weak at the knees and oh boy that 2013 Reserve Cabernet which was perfectly matched with the lamp rump was liquid from the gods! Absolutely lick-smackingly good. To be honest, I initially thought it was a bit strange to not have a dessert on a degustation menu – but hey, give me a glass of that Cab and some lamp rump with sweet bread, beetroot and witlof any day in place of a lava cake.

Right from the amazing aroma of the ’13 Cab to the velvety silky tannins – this wine has a truly excellent tannin structure. The only problem is my glass emptied out way to quickly! I think I’ll be visiting the Grace Farm online shop soon!

So what were these gorgeous wines matched with? Here is the menu we were presented with on the night, grab a tissue as you’ll be drooling by the end of it: I just have to say that the dishes were like artworks, so beautiful and the 60+ photos I took of the 5 dishes is testament to that! I am not going to delve into the ins and outs of the dishes, I feel this is an occasion for letting the photos do the talking. However saying that my photography skills definitely don’t do the dishes the full justice they deserve!

PS: I love how they kept the menu so short and sweet and then there were little surprises on the plate like the addition of Manjimup black truffle on the lamb rump! Again a big thanks to Grace Farm for inviting me along to join them for this amazing dinner!

Is wine at 9am acceptable? Hell yeah it is! Banish those fears of looking like a complete alco by drinking with breakfast, a Champagne breakfast or sparkling wine breakfast is a true sign of luxury and indulgence, trust me – google it. There are actually not that many places in the Swan Valley that do…

Recently I was invited by the team at the Joondalup Resort to attend a degustation at their in-house restaurant – Bistro 38. The $75 ticket included 7 courses which included produce from Yarra Valley Dairy with wine to match each course by Sticks Winery, also from Victoria’s Yarra Valley. My ticket was free however we paid…

Yes it is a bit late. We’re over half way through September and I am finally getting up my top wine finds for August! Better late than never when it comes to popping another bottle I say. Today we welcome back to the blog the lovely Nicola Heyes who headed to Sunset Wines & Brews with her hubster Ralph on behalf of the Travelling Corkscrew. She was sending me updates all night as I sat in front of Netflix, to say I was just a bit jealous is an understatement! If you’re…

Sticky date pudding, butterscotch sauce, brandy snap and rum and raisin ice cream – does life get better than this?! I admit it, I absolutely love food photos – taking them and spending hours scrolling through them. So when I saw photos on the Riverbank Estate Facebook page of their new winter menu, well I…