It seems only natural when we go only holiday, that I hunt out the closest wineries. Mr. Spittoon’s family actually live in Hamilton, which falls into the Waikato-Bay of Plenty wine region in New Zealand. Of the 10 or so wineries in the region, Vilagrad Wines is one and it’s only about a 15 minute drive from the Hamilton CBD in Ohaupo.

There’s no doubt the winery is well-known to the locals and as my brother-in-law put it, ‘everyone has had some sort of function or work do at Vilagrad’. I can understand why, as it is such a pretty spot in Hamilton, or aka The Tron as us Kiwi’s typically refer to it. The winery also has a pretty interesting story which I want to share with you guys today. Grapevines for Vilagrad were originally planted in 1906, however it was in 1922 the winery was established by Ivan Milicich Snr who migrated from Croatia. To this day, the winery remains family owned and operated with the very passionate James Nooyen heading up the winemaking. James is the eldest son of Pieter and Nelda Nooyen (Nelda being the grand-daughter of Ivan).

James is joined by his two brothers which is how the sister label of Vilagrad, ‘3 Brothers’ started. This range focuses on producing wines from grapes also grown in other well-known wine regions around New Zealand. In 2015 a devastating fire broke out at Vilagrad which destroyed around 60% of the property, in 2017 it’s still very evident what happened, but it’s safe to say they are bringing out the positives with plans to rebuild bigger and better. Not to mention in the meantime, they have used what’s left of the brickwork and such to create a lovely rustic atmosphere that looks bloody gorgeous when dressed up, like for the wedding below.

And that view out to the vines… It had me swooning.

There are plans to build a cellar door experience into the property. When we visited in December 2017 we enjoyed a tasting at the bar. Pieter started off the tasting and then James took over. He had plenty of stories to tell us about the winery and vineyard. Not to mention he opened everything on the list for us to try – we were very spoilt. The cellar door is open from 9am until 3pm Monday – Friday and from 12-4pm Sundays. I hear the Sunday lunches are pretty epic. The family put on a Mediterranean Spit Roast style buffet lunch for about $45 per head.

There are quite a range of wines to try from wines made from grapes grown on the property as well as from around New Zealand.

It’s probably the ‘Charminer’ which first grabbed my attention. This wine is a Chardonnay and Gewürztraminer blend which they make as a still and a sparkling wine (carbonation method). In terms of my favourites for my palate, it was the 3 Brothers range which really stood out for me – they have some absolute gems there! Here are some of my tasting notes:

I found on my recent NZ trip that Pinot Noir Rosés are really dominating the shelves. The good need is, I quite enjoy them, including this @vilagrad 2017 Pinot Noir Rosé which we picked up from their cellar door in Hamilton for $18. It’s a pinky peach colour on the eye. Notes of candied musk, raspberry and cherry come through on the nose. While on the mouth it’s full of sweet cherry lollies and refreshing lemon acidity. Extremely easy to consume! All opinions are based on my own taste buds. Wine is subjective & always evolving, so make sure you drink what you enjoy! #tcweekdaywine #tctastingnotes . . . . . #vilagradwinery #hamiltonwine #waikatowine #hamiltonnz #waikato #nzwine #wine #vino #rosé #roséwine #roséallday #yeswayrosé #pinotnoir #wineblog #wineblogger #travellingcorkscrew #instawine #ilovepink #ilovewine #winelover #winetasting #newzealandwine #nzwineblog #nzwinegirl #newzealandmade #wineoclock

A post shared by Travelling Corkscrew (@travellingcorkscrew) on Dec 30, 2017 at 1:09pm PST

This @vilagrad 2013 Sparkling Charminer was a hit with the in-laws over Christmas. It’s made via carbonation from Chardonnay and Gewurztraminer. The name ‘Charminer’ was created via a competition which went viral – the prize to name the wine was a years supply of wine, so it’s no surprise it went viral. This bubbles is a golden kiwifruit colour in the glass. On the nose I picked up hints of baking spice, lemon and tropical fruits. It’s medium-sweet on the palate with distinct lemon and pineapple flavours. It would be a nice food friendly wine. I much preferred the still version of this wine personally. $17 a bottle. All opinions are based on my own taste buds. Wine is subjective & always evolving, so make sure you drink what you enjoy! #tcweekdaywine #tctastingnotes . . . . #vilagrad #vilagradwinery #nzwine #hamiltonwine #waikatowine #wine #vino #wineblog #wineblogger #nzwinegirl #travellingcorkscrew #winetime #winesearcher #winelover #christmaswine #instawine #ilovewine #christmastree #charminer #chardonnay #gewurztraminer #bubbles #sparklingwine #celebrate #partytime

A post shared by Travelling Corkscrew (@travellingcorkscrew) on Dec 28, 2017 at 4:40pm PST

After visiting @vilagrad in Hamilton recently, this 3 Brothers Single Vineyard Sauv Blanc stood out to us. It’s made from Marlborough grapes and has a wee bit of age on it being a 2014. The winery started up in 1922 and remains family owned and operated with the fifth generation at the helm. They have a beautiful spot in the Waikato and are actually in the process of rebuilding after a devastating fire in 2015. This Sauv’s a light lemon colour in the glass. Passionfruit, lemongrass and an air of herbaceous-ness are apparent on the nose. In the mouth it’s fresh yet smooth and mellow with mouth-watering flavours of Chinese gooseberry and a squeeze of lime. $20 well spent! All opinions are based on my own taste buds. Wine is subjective & always evolving, so make sure you drink what you enjoy! #tcweekdaywine #tctastingnotes . . . . . #vilagrad #vilagradwinery #nzwine #hamiltonwine #waikatowine #marlboroughnz #marlboroughwine #wine #vino #wineblog #wineblogger #nzwinegirl #travellingcorkscrew #sauvignonblanc #winetime #winesearcher #winelover #christmaswine #sauvblanc #instawine #ilovewine #christmastree

It seemed fitting to snap the ‘Waikato’s favourite white wine’ with this burnt orange Ford Mark 2 Cortina – very Hamilton-esque! The @vilagrad ‘Charminer’ is a blend of Chardonnay & Gewürtztraimer and is produced in a medium sweet style which had me craving Thai or some sort of spicy ? food! It’s about $15 a bottle. It’s a pale golden yellow colour with vanilla honey, honeydew melon, candied lemon and peach on the nose. It’s definitely medium sweet on the palate yet balanced with acidity. It’s fruity and approachable and it’d be a perfect accompaniment to a Pad Thai! There’s also a sparkling carbonated version. All opinions are based on my own taste buds. Wine is subjective & always evolving, so make sure you drink what you enjoy! #tcweekdaywine #tctastingnotes . . . . . #vilagrad #vilagradwinery #hamiltonnz #nzwine #charminer #chardonnay #gewurztraminer #wine #vino #fordcortina #mk2cortina #burntorange #winetime #wineblog #wineblogger #kiwiwine #nzwinegirl #nzgirl #nzwines #cortina #ford #wineandcars #wineoclock #fillmeup

A post shared by Travelling Corkscrew (@travellingcorkscrew) on Dec 20, 2017 at 2:39pm PST

If you haven’t visited Vilagrad Wines yet and you’re in or around the Waikato, make sure to stop in for a taste and to soak up the view. Definitely a great highlight when visiting H-Town! With Sauvignon Blanc Day just around the corner, I thought it would be a great idea for the blog to get a little Savvy! Therefore I have invited along the lovely Lisa from The Sisters Wine in New Zealand to share with us some info on what makes NZ Sauv Blanc so great! Enjoy guys!

You can take the girl out of New Zealand but you can’t take the NZ wine out of her glass. Now, this is one special bottle we picked up on our last trip to New Zealand. It’s also one heavy bottle with a very deep punt (the indentation on the bottom of the bottle). The ‘LV’ range by winemaker Louis Vavasour is pure luxury and at $65 a pop, you’d hope for something a little… 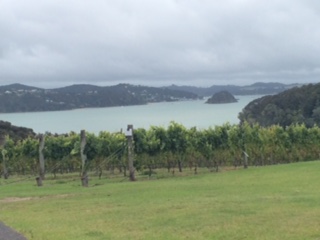 As some of you may know, I love to invite guest bloggers to share their wine experiences and knowledge on the blog. This week we have a very special guest poster – my Dad!! Naturally he is a big wino (I wonder where I got it from!) and he was recently invited along to Omata… Hands up if you love rosé! This Astrolabe 2017 Beacon Hill ‘Pinot Rosé’ from Marlborough is made from Pinot Noir and a small portion of Pinot Gris grapes. I quickly picked it up from the bottle shop on the weekend in NZ to chuck in our bag to bring back to Aussie.

Villa Maria Estate in New Zealand has been employing organic wine principles since 1999. It was in 2007 when they achieved the internationally recognised BioGro Organic Certification for a 21 hectare block in Hawkes Bay. And in 2009 Villa Maria became the first major winery in New Zealand to gain BioGro certification!